Santorini, officially Thira and classic Greek Thera, is an island in the southern Aegean Sea, about 200 km southeast from the Greek mainland. 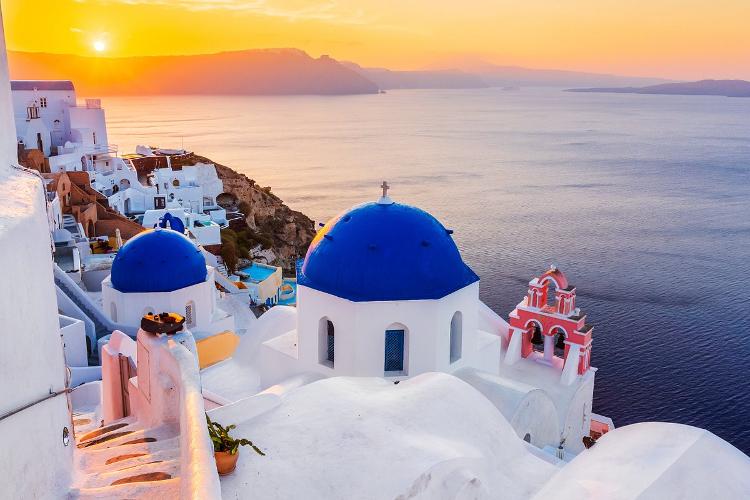 A stunning and authentic destination

The power of the volcanic island of Santorini creates an energy that overwhelms the senses. Exquisite luxury, amazing food and wine and the unforgettable Santorini sunset are just the start of what this legendary Greek island in the Cyclades offers visitors.

Santorini is an island-phenomenon whose reputation precedes it. And for good reason. On this legendary island in the Cyclades, all your senses seem magnified, a product of its many contrasts: black earth against whitewashed homes clinging to the cliff-side, or wild volcanic sculptures against sleek Cycladic lines.

Also known as Thera in Greek, Santorini is an island immortalised by poets and painters thanks to its celebrated light, multicoloured cliffs and picture-perfect sunsets. If it’s always been your dream to visit Santorini, here is just the start of what awaits you.

Things to do on Santorini island:

Lay back and let the luxury-fest begin. Santorini and luxury are synonymous. This is the island of infinity pools that flirt with the edge of the cliff, with the Aegean Sea laid out in front of you in all its glory. So how about starting off relaxing on a sunbed, a refreshing cocktail in hand? Or perhaps a romantic meal for two, paired with a fine wine (made locally, of course)? You’ll be in the mood to explore more in no time.

Explore Akrotiri, the Pompeii of the Aegean:

Akrotiri is a prehistoric city that lies beneath a bioclimatic shelter. Walking over wooden bridges, you will encounter one of the most important and well-preserved civilisations in the Mediterranean, which was covered by the ashes of the great volcanic eruption of 1600 BC. Visit the museum of Prehistoric Thera, at Fira, to admire its famous frescoes, among them Spring, The Monkeys and The African. A world frozen in time awaits you on the island of Santorini.

Taste the exquisite cuisine of Santorini:

The cuisine of Santorini boasts extraordinary ingredients thanks to the nutrient-rich volcanic soil. Amongst the island’s specialities are its famous sun-dried cherry tomatoes, fava beans (split peas), capers, and white eggplant. The local chefs are always experimenting, combining traditional recipes with modern gastronomy, making the island a top culinary destination in Greece.

Santorini island is lined with unique beaches in exotic colours of black, red, and white, a product of its explosive past. At Kokkini Paralia (Red Beach), Aspri Paralia (White Beach), Perivolos, Perissa and Kamari, the earth has been naturally transformed into immortal works of art.

Take a stroll along the rim of the caldera:

Top (literally) of all the experiences to enjoy on Santorini island is to take a stroll along the rim of the caldera, from Fira to Firostefani and Imerovigli. The more adventurous can challenge themselves by taking the path to Oia, passing the Prophet Elijah’s Church, Chapel of the Cross and Black Mountain, which is iridescent at sunset.

Why don't you spring into action and snag it up while you can? Contact us to get started and book this deal!

Your E-mail has been sent. We will be in contact with you soon.

Please refresh the page and re-submit the form.

SORRY
Your content caused an error and your email has not been sent.
Please remove any unusual characters and try again